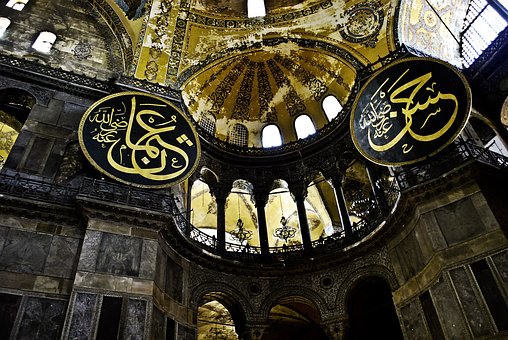 A review of The Lost World of Byzantium by Jonathan Harris is near impossible to write. The book, incidentally, is far from impossible to see, despite its rather dry style. The problem is the breadth and sheer extent of its topic, an issue the author confronts with both enthusiasm and endurance. Frequently history presents the casual reader with a hard-to-negotiate problem, being the straightjacket of preconception. And it is often a problem of which we’re unaware, precisely because we are rarely aware of the assumptions we bring to any expertise. And this is exactly why we need books like this one by Jonathan Harris, because it can cut through what we clearly do not understand. We need to confront preconceptions, because the process is always enlightening. However, the process is often hard too.

The challenge from the Lost World of Byzantium is met head on and early on. We talk a lot of Rome, and even less of Byzantium. We hail the achievements of the former, and generally record the shortcomings of the latter. We see Rome as somehow noble, correct and classical, whereas Byzantium is often corrupt, degenerate, knavish and unsuccessful. And, as Jonathan Harris points out, we are constantly explaining why the Byzantine Empire finally failed. What we rarely acknowledge is that at its height it was a more extensive empire than Rome’s and, importantly, it lasted longer than its precursor. Plus it was Christian from the beginning.

It is this perception of Byzantium as eventual failure that Jonathan Harris dispels at the beginning. Additionally it is essential that he does this, since then we can appreciate the detail of the empire’s history in its own context, rather than in a different imposed by our own preconceptions about a future it never watched. In many ways, the history of the Byzantine Empire was the history of Europe from the fourth to the fifteenth century. The Ottoman expansion westwards and its eventual conquest of the empire functioned to supply a wake-up call for concerted action to defend Christianity. The fall of Byzantium, however, rendered any prospective sectional gain irrelevant, for if the edifice fell, there would be nothing for anybody. And therefore the continent changed a bit after Lepanto.

Any reader of such a long and complicated history as that of the Byzantine Empire, however, must keep in mind the size and scope of the author’s task. The Lost World of Byzantium may comprise about 150,000 words, but it is trying to pay more than a century of European history, and of course swathes and eras of Middle Eastern, Central Asian and North African history also. We soon learn not to regard the Byzantine Empire as a purely or even primarily European phenomenon, as regular conflicts are fought to the south and east as well as to the north and west. What becomes clearer, however, is that an empire could wage war in its periphery, and that war might result in contraction or expansion of its land. However, if the empire wages war against itself at the centre, then the threat to its safety is existential. Jonathan Harris’s book relates several occasions when Byzantium endured such complete and wounding internecine transformations.

An enduring insight from The Lost World of Byzantium relates to this general function of religion in these transfers of power, and specifically the capability of theology to make empires, rulers, dynasties and possibly states. Byzantium was founded on Constantine’s embracing of Christianity. However, this was only the start of the narrative as we perceive it. The early church was riven by schisms and heresies, especially the Arian interpretation of the character of Christ. From the perspective of our own age, these theological differences might seem to have the significance of disagreements on the specific count of angels on a pinhead. But at the moment, theological disagreements could result in persecution, exile and war. A long time after the church had solved some of its self-generated conundrums, new theological differences arose with similar consequences. It is an excellent achievement of Harris’s book that it manages to increase what we now might regard as arcane to the status of living political debate. If economic advantage granted by the achievement and achievement of power, as ever, remained the target, the political and ideological battleground where that status was procured was often theological and only if we appreciate that job do we understand the background of the empire, and perhaps also the history of the earliest and much of the next millennium of the Christian era.

If there is a criticism of the monumental work, it’s that the necessity of chronicling the incumbents of the throne occasionally make the background a mere collection of tenants, a procession of kings who merely appear to come and go. The Johns, the Michaels and the Constantines keep coming, eternally counting, and it seems sometimes that only the figures change, as every incumbent suffers his own conspiratorial fate, often remarkably similar to that of his predecessor. There are numerous child emperors, all with their own nakedly ambitious protectors. And also history seems to reproduce itself as yet another incumbent marries to secure peace and alliance, or pursues yet another catalogued military effort against north, south, east or west, as ever only partially successful. The muddle, it seems, tends to continue.

In general, the book deserves some criticism for not including enough description of the social and economic conditions within the empire. Such diversity, both ethnic and religious, needs more detail to supply a photo of its complexity. There’s not much that conveys any sense of what it was to live even in Constantinople, itself, let alone the Byzantine Empire as a whole. But then, with a job of this size, any writer needs to be selective. Jonathan Harris simply could not have included material of the type without doubling the size of an already massive book. And, given the writer’s commitment and dedication to his subject, this lack needs to provoke most readers to explore more of his output. This facet surely has been covered elsewhere.

What’s included are descriptions of greens and blues, Pechenegs, Basils, various Phokases and numerous Theodoras, alongside Abbasids, Seljuks, Fatimids and hordes of Constantines. If even one of these strikes a blind spot, then Jonathan Harris’s book will help provide the missing understanding. If anything, it is surely comprehensive. History is about much more than our preconceptions and all good writing on the subject should remind us of the fact. The Lost World of Byzantium provides a superb opportunity to learn much about this neglected, but crucial era of history.

Philip Spires is author of A Search for Donald Cottee is a comic tragedy about individualism.